So finally 28th April arrived last Sunday! It was in all Spanish peoples’ agenda for the last month – another Spanish general election for the third time in just 3 and a half years, not great news for the stability of the country.

Probably that was the reason why everybody was saying that these were the most important elections in many years. You have to bear in mind also two things to put elections in context:

First, the current government (PSOE) and “Presidente del Gobierno” (Pedro Sánchez) came after a vote of confidence lost by previous one (Mariano Rajoy and PP) and Pedro Sanchez didn´t manage to have a strong support in the last 10 months as President, that was why he had to call for new elections.

Then, and the most scary one, regional elections in Andalucia predicted that a far right party (VOX) would have representation in the Spanish Parliament for first time in our new democracy.

So with all that in context when 28th April arrived everybody had their eyes in VOX and if they could even get in the government with a conservative coalition with Ciudadanos and PP or on the other hand, as many forecasts showed, if PSOE could have a strong result and managed to get a strong position in the Parliament.

Leaving the results behind, I believe that was a great day for Spain because the participation was very high, 73% of the people voted in comparison with 2 years ago where only 63% voted.

And the results were: 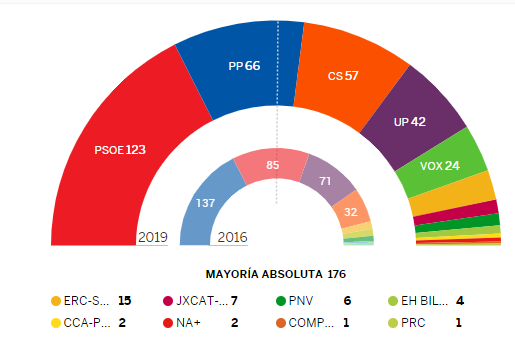 Everybody predicted VOX to get in Parliament but maybe not with so many MP, on the other hand the biggest failure of the day was the former winners party (PP) that lost 71 MP from previous elections as you can see in the graphic. You can also see the difference from last two elections in below graphic, where the winner in each region is coloured (red for PSOE and blue for PP). In Catalonia and Basque country nationalist parties won. 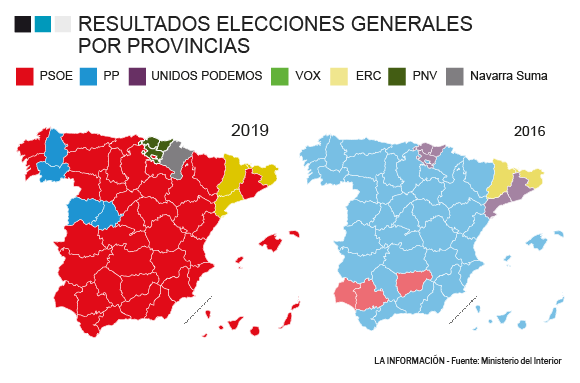 So after the result looks like PSOE will manage to have a strong government on their own or even have a coalition with PODEMOS, but what it looks like is that we should have more political stability in the next 4 years.

But do not forget that we have the Catalan issue which is for Spanish politics similar to Brexit so maybe is too risky to predict stability.

Hola! I am Enric Sancho from Barcelona. I've always loved to study different languages and learn about other cultures, so 3 years ago I decided to make teaching Spanish my profession and I love it. I qualified as a teacher at International House London where I learnt about the communicative approach and a few months ago I also qualified as a DELE A1/A2 examiner at Instituto Cervantes in London. I always aim to make my lessons interesting and enjoyable with cultural tips, so my students travelling to South America and Spain can communicate with native Spanish speakers.