All About My Mother

That’s it, ladies and gentlemen: 2020 has officially begun! And, of course, our first Hispanic London event of the decade could be none other than a screening of one of legendary director Pedro Almodóvar’s best films. All About My Mother (in Spanish, Todo sobre mi madre) will be screened this Thursday, 23rd January at 7pm at the India Club Lounge-Bar on the Strand. 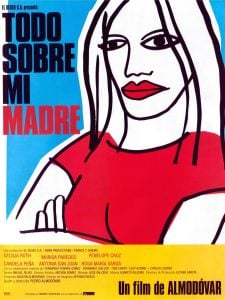 All About My Mother is a poignant story of love, loss and compassion. It tells the story of Manuela, an Argentine nurse who oversees donor organ transplants in a Madrid hospital and a single mother to Esteban, a teenager who wants to be a writer. Full of references to classic melodramas such as A Streetcar Named Desire, the film conjures a rich universe of unforgettable women.

All About My Mother deals with complex issues such as AIDS, homosexuality, transsexualism, faith, and existentialism. Almodóvar dedicated it “To all actresses who have played actresses. To all women who act. To men who act and become women. To all the people who want to be mothers. To my mother”. It is a powerful, openhearted tribute to female friendship and resilience, and we couldn’t recommend it enough!

The film will be screened in Spanish with English subtitles. Tickets also include paella, and there will be a bar serving a range of refreshments and cocktails.

¿Te interesa? Find out more and buy your tickets here.